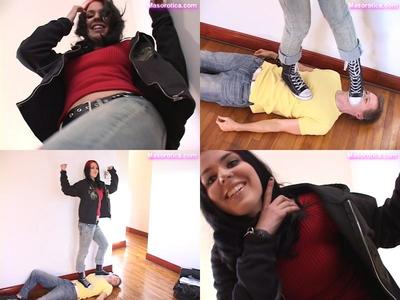 Princess Serena wanted to exercise her legs but her mode of doing it was what was weird. She chose to trample her slave as a way to exercise her feet. She wore her sneakers because she considered it exercise and she trampled on the slave who was lying down. She turned a deaf ear to his screams of pain and went on with her exercise till she was tired of it.

Mistress and her hate for sissies

This mistress hates sissies and this guy was one. He was trying to chat her up but when she realized he was a sissy, she did not care about anything else. Her number one priority became humiliating him and nothing else. She trampled him in her house when he came to check on her and she crushed his body from head to toe and did not spare even his balls.

Mistresses trample guy as a form of massaging him

This guy had started to work out and his body was in pain and needed a good rub. But he did not want a soft rub so mistresses Sonny and Joss helped him but they did it by trampling him. That was the best they could do for him and surprisingly, he liked it and it was effective for him. It also helped that the has a high threshold for pain.

Lady Betty was testing the limits of her new slave and she wanted to do it different from the way she had done with her previous slaves. She wanted to use spit as well as trampling so she started with spit and enjoyed spitting on the slave and making him lick her spit. She enjoyed how humiliated he was by what she did to him before she began trampling him.