Princess Serena could not go to the gym because her slave had spoiled her car. She was pissed and she called a tow truck to take it to the repair shop. But she had to punish him for it. She trampled him and she did her aerobics on his body. She body trampled him from head to toe and with her sneakers as well as with her bare feet. He could not do anything about it as it was his fault he was being trampled.

Mistress Asia does not like lazy guys. This guy she was seeing was lazy and she could not let it go on. She told him to keep himself busy but he did not so she got fed up with him and she trampled him using her sneakers. She body trampled him all over and she made sure he cried in pain. She told him she would do that till he stopped being lazy.

This mistress lied to her boyfriend that she wanted to try something naughty. She wanted them to go to a thicket and have sex there. He agreed and was pretty excited about it. But when they reached there, she crushed him and she trampled him from head to toe. She then told him what he had done and she told him never to do it again if he did not want a repeat of that. 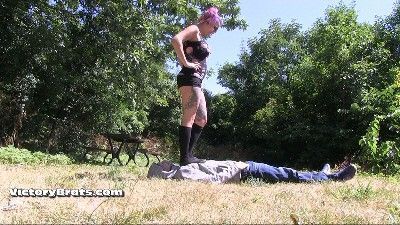 Mistress Vanny body tramples guy for spreading rumors about her

Mistress Vanny was told of the guy who was spreading rumors about her in the office. It was clearly intended to injure her reputation in the office and even lead to a demotion or a dismissal. But she was not going to take it lying down. She laid a trap on the guy and she caught him in the act. she then used her high heels to body trample him and teach him a cruel lesson.

This slave stole from this mistress and he had to be taught a lesson. The mistress did not need any help with punishing him. She did it all herself and she managed to teach him the lesson of a lifetime. He was made to endure pain of trampling and stomping. She stomped and trampled on him using her boots and he cried as the pain got more and more intense.

Mistresses have fun at loser's expense

Mistress Bruh and lady Stefany were bored in the house. So they went out and found this loser. They went back home with him and they had fun humiliating him. They body trampled him and kicked him. They also whipped him and had him lick their shoes. He was in a lot of pain but they did not care. They twerked as they trampled his back painfully till it was all red.

Mistress Jessica has lots of shoes. And she knows all of them. This loser thought she did not know all of them and he tried to steal a pair. She immediately knew one pair was missing and she asked him but he feigned surprised. She could tell he was lying so she stomped and body trampled on him using her boots to make him tell her the truth and he did.

Goddess Meiko and goddess Honey did not like how noisy their neighbor was. He had to learn to be less noisy for the sake of other people but whenever they told him, he ignored what they said and he did what he wanted. The mistresses got pissed today and they stormed his house and they trampled him painfully. He was forced to endure a lot of pain from body trampling and he learned his lesson.