Mistress Gaia wanted to teach her friend how to have fun and how to humiliate. So she got her friend to bring a loser for trampling. The mistresses had fun trampling him. He was trampled on every inch of his body and his entire body was on fire. He cried as he was trampled but the mistresses did not feel anything for him. Mistress Gaia's friend was following her lead.

This mistress is a jealous girlfriend. She does not like her boyfriend talking to other girls and when she deems something he has done with another girl as inappropriate, she has to punish him. She found him chatting with another girl and she did not like it. She body trampled him painfully as punishment and got him to do what she wanted. She even jumped on him and told him to lose that girl's contacts.

When this mistress realized that this loser was not going to grant her wishes, she had to give him a piece of her mind. She lured him to her bedroom where she crushed his face and his entire body using her crocs. She had fun facestanding on him. She trampled him and laughed at him as he cried and begged for mercy. She even posed for a photo as she trampled him. 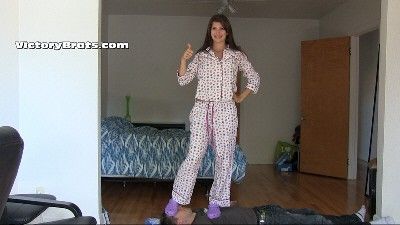 Madame Marissa was pissed to learn that her slave had been stealing from her. She was so mad at him that she decided to trample him as punishment. She made it as cruel as she could and made sure he learned his mistake. She rolled him in carpet and she used her boots to jump and to trample him. He cried and promised never to do it again but she ignored him.

Lady Stefanie did not like how her slave was not able to keep a secret. She tried to warn him but when she tested him, she found out he still could not keep a secret. She was disappointed in him and she had to do something radical to ensure he did not give out her secrets. She crushed his tongue with her high heels to send a stern warning that she was prepared to do that again and worse if need be. He learned to keep secrets.

Mistresses pay loser to trample him

Mistress Gaia and her friends were so bored that they paid this guy to endure their humiliation and torture. He needed the money and had no other way of getting it. So he endured the mistresses body trampling him with their high heels. He cried as they did so but they did not care since they were paying him for it. He had to earn it and by the time they were done with him, he had earned every single cent.

Mistress Lisa does not like to be betrayed. That is what this guy did to her. She was not going to take it lying down so she humiliated and degraded him for fun. She cruelly trampled him with her sneakers on before removing them and trampling him with her socks. She made him lick her feet and inflicted pain on him as she trampled him without any hurry. She did that so that he could feel a lot of pain.

These mistresses were having a party and this guy thought it best to join them. They did not refuse. They just laughed and told him to join them. He could tell there were no guys but he was not alarmed. It was not long before the mistresses tricked him and had fun at his expense. They did not even have to force him. He got drunk and he allowed them to do what they wanted to him including trampling him together at the same time.

Madame Marissa could not believe why her slave had to lie to her yet she had been good to him all along. Since he had made the decision to lie to her, she chose to show him the consequences of his actions. She trampled him as punishment and he had no choice but to take the punishment. She stomped on him and he cried in pain and begged for mercy.

Mistress Tiffany was not happy to learn that her slave had told her neighbors about her secrets. She was mad and she had to teach him a lesson. He was effective in his work and she did not want to send him away. But she was not going to let him get away with it. She chose to trample him as punishment and he had no choice but to endure the punishment. He learned his lesson.