All articles tagged with "Submission"

This guy loved catcalling and he did it all the time. But today he catcalled the wrong mistresses and they tortured him for it. He was taken to their torture chambers where he was trampled painfully and cruelly. He cried and told them he was not serious about his catcalls but they did not listen to him. They warned him that the next time he did it, he would be ball crushed.

Mistress Tiffany was pissed to learn that her slave had not done laundry. She had asked him to do it but he did not. The mistress used her body trampling fetish to punish him and it was a cruel punishment. He had never experienced such a treatment before and he cried as he felt the pain of her trampling. When she was done with him, he got up and he did the laundry.

Mistress Sabrina caught her boyfriend lying to her. She was so angry at him and she felt like she had to deter him from lying to her again by trampling him. She jumped on his body after she had thrown him on the floor. The mistress laughed at him as he cried but she told him that he had brought it all to himself and it was up to him if it happened to him again.

Mistress Ines and mistress Adele found out they were dating the same guy and they were pissed. It was all fine until the two of them became friends and that was when they realized they were seeing the same guy. They planned to torture him and they did it by body trampling him. Mistress Ines had invited him to her house where he found both of them waiting for him. 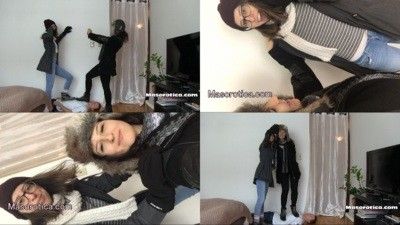 When this mistress realized that this loser was not going to grant her wishes, she had to give him a piece of her mind. She lured him to her bedroom where she crushed his face and his entire body using her crocs. She had fun facestanding on him. She trampled him and laughed at him as he cried and begged for mercy. She even posed for a photo as she trampled him.

Goddess Meiko and goddess Honey did not like how noisy their neighbor was. He had to learn to be less noisy for the sake of other people but whenever they told him, he ignored what they said and he did what he wanted. The mistresses got pissed today and they stormed his house and they trampled him painfully. He was forced to endure a lot of pain from body trampling and he learned his lesson.

Mistress Alex does not like guys who do not pay back their debts. The mistress asked this loser for her money but he did not give it to her. She tried again but still he did not do anything. She was pissed and she knew she had to do something drastic to get the money from her. So she trampled him using her high heels and that did the trick.

Lady Anastasia does not like being questioned when she makes a decision and when her slave tried it, he had himself to blame for what she did to him. She used her bare feet to trample him. She crushed his head and tortured him as hard as she could manage to do. She did it over and over again till she was tired and convinced he had learned his lesson.

Mistresses Joss and Sonny are new to trampling but they were determined to become pros. They knew that for them to become as good as they wanted, they needed to practice. So they got a loser and practiced on him. They had fun trampling him all over his body and using their bare feet to inflict pain on him. For him it was pain but for them it was a lot of fun.

After being gone all day, Annabell enjoys spending a snowy night in. After a few hours, she is bored and decides to walk all over her slave. She knows that she needs to put on her boots so she finds her chunky heels and puts them on. She walks on him until he is red and begging for mercy. She takes her heels off and jumps on his chest until he is moaning in pain.